Canonical announces that they will release Ubuntu for Android. This application designed to run under Android based smartphones. “Ubuntu is the killer app for multi-core phones in 2012” as they stated on Ubuntu official website. 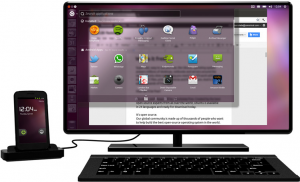 The main purpose of this application is to move the Ubuntu desktop functionality to the Android smartphone. This concept will remind people on the Motorola Atrix WebTop platform.

You do not need to worry because of the calls and SMS can still be handled properly when Ubuntu for Android is currently running. List any contacts will automatically synchronized, so the caller or SMS sender ID will appear properly.

The bad thing is the usage of docking device is a mandatory thing, that means you have to carry its docking device. But at least it was a forerunner of technology that allows us to work anywhere and anytime.